Draft of receipt form for shipments of gold by the B.C. Gold Escort, Richfield, B.C., 1863. 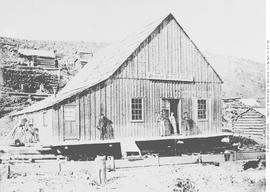