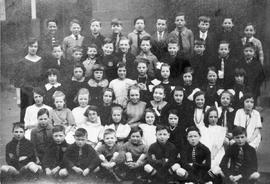 Robert Martin Strachan was born in Glasgow, Scotland on December 1, 1913, emigrating to Canada under the auspices of the National Association of Boys' Clubs in 1931. He worked as a farm labourer and miner in Nova Scotia and New Brunswick before making his way to British Columbia and working in the copper mines of Anyox. When the mine closed in 1935 he settled in Powell River and informally apprenticed as a carpenter. He subsequently became president of the Brotherhood of Carpenters and Joiners of America.

In 1948 Strachan moved to Nanaimo and in 1949 he made his first bid for public office, as Cooperative Commonwealth Federation (CCF) candidate in the federal general election. He was defeated by Major-General George Pearkes.

He became leader of the provincial CCF party in 1956 and remained Leader of the Opposition after the formation of the New Democractic Party (NDP) in 1961. In 1968 Strachan was eventually compelled to give up his position as Leader to Tom Berger in 1968. Berger, in turn, was succeeded by Dave Barrett, who formed the province's first NDP government in 1972.

When the New Democratic Party came to power provincially in 1972, Strachan was appointed as Minister of Highways. The following year, in 1973, he was named head of the new Ministry of Transport and Communications, a ministry responsible for the Motor Vehicle Branch, government aircraft, commercial vehicles, telecommunications, and the B.C. Ferries. Strachan was also appointed president and chairman of the board of the newly created Insurance Corporation of British Columbia (ICBC).

In 1975, he resigned his seat when he was appointed B.C. Agent General for the United Kingdom and Europe. He served as the province's overseas representative in London until August 1977, when he returned to his home in Cedar, B.C. and retired from politics.

Strachan died in Victoria on 21 July 1981. He was survived by his wife, Anne Elsie (nee Pagett), whom he married in Vancouver in 1937, and by two sons and a daughter.

The fonds consists of personal and political papers, as well as family correspondence, diaries, CCF essays and reports, letters from constituents, other correspondence and official records.

These records are subject to the Freedom of Information and Protection of Privacy Act or other acts and access may be restricted. Please contact the BC Archives to determine the access status of these records.