[Atlas of the northwest coasts of America : maps / compiled by M.D. Teben'kov] 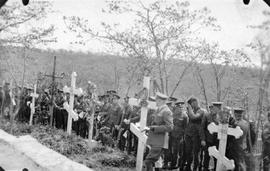 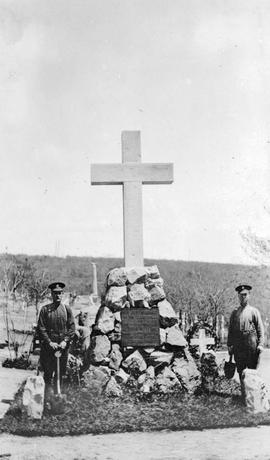 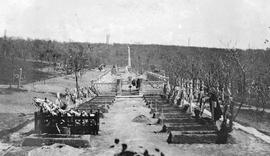 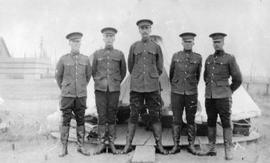 Five men in front of tent. 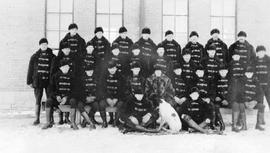 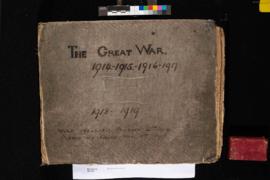 The series consists of a photo album with 267 pages and 1437 b&w photographs that cover the period 1914 to 1919. The album measures approximately 32 cm x 42 cm x 10 cm and the average photograph measures 9 cm x 14 cm. The album has been annotated in pen, presumably by the photographer.

The pictures in the album are from a variety of military-related events that took place in or near Victoria, B.C. There are also a couple of photographs that were taken in England. It is not known who took these photographs in England or how they were acquired as it does not seem that Crocker went to England at any time during the Great War. It is also not known if these prints were sent to Crocker or if he developed his own copies of the original negatives, as the paper, quality and size of these photos are consistent with the other ones in the album.

Topics range from departures and arrivals of soldiers in downtown Victoria, to pictures taken at camps of soldiers, political dignitaries, and nurses, pictures of parades, recruitment offices, a military funeral and other events in which the military was present such as the opening of parliament, tag days, provincial holidays, royal visits and the anti-German riot.

Photographs are mainly of crowds at public events, soldiers marching in the street, soldiers drilling or being inspected at camp, soldiers posing with family and friends, and ships leaving the harbour. Photographs are primarily taken in Victoria (particularly Government and Belleville streets), Willows Camp, Beacon Hill, and Work Point Barracks, Esquimalt.

The following events and subjects are represented in the album. They are listed here in order of appearance and are transcribed directly from annotations that appear in the album:

The album was originally arranged in reverse chronological order, starting with the most recent photographs, though there are instances when this order is not followed. Additionally, it appears that the album’s original order may have been altered due to deterioration and handling. The album is currently broken into two separate pieces. The first piece which includes the front cover is entirely separate from the rest of the album and currently sits on top of it. It is unmodified and the last pages are exposed to handling and are therefore quite damaged and deteriorated.

The second piece of the album has been retrofitted with a cardboard cover to protect the first pages while the back of the album is protected with the original hard cover. It also appears that at some point in time another bulk of pages were wedged in between the last page of the album and the back cover. Most of the photographs, if not all, do not have original glass plate negatives within our collections. However, many of the events represented in the album are also represented in MS-3356, albeit from different angles. It is possible that the photographs in this album were taken by an assistant working with Ernest Crocker.