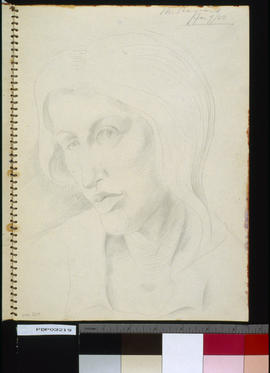 File consists of one sketchbook belonging to Joan Clark. The sketchbook contains 32 artworks in a variety of mediums (graphite and ink sketches, watercolour paintings) presumably created by Joan Clark, although her signature does not appear on the works. Some of the artworks are titled or otherwise identified. Also included within the sketchbook is one sketch in graphite by Max Maynard (PDP03219) which is signed M. Maynard and dated January 9, 1940. The Maynard sketch is the only item within the sketchbook described at the item level.

Item is held in PDP vault and cannot be viewed without an appointment.

PDP03219 is within the sketchbook.