RECORDED: [location unknown], [196-] SUMMARY: TRACK 1: At a surveying camp for the PGE near Takla Lake, various men -- including Neil O'Neal, Frank Archibald, and Mark Norris -- talk with Imbert Orchard about rail lines, including life on a rail line, and the locations of several of Gun-an-noot's cabins. Then the sounds of traveling by barge are heard; Orchard narrates what he sees upon arriving at a camp near Takla Lake; and more sounds are heard. TRACK 2: The track starts with the sounds of a barge on Takla Lake and a description of events while traveling by barge to Stuart Lake. Orchard then comments about the scenery; the atmosphere and the voyage. Man sitting in boat ("Jean Lou B") on the left; First Nations woman and children on shore on the right. 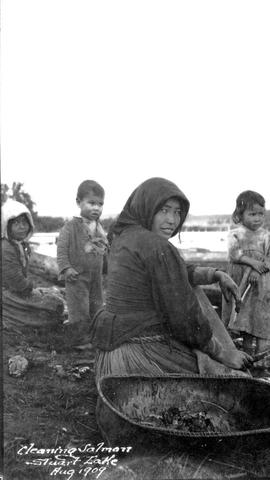 The woman in the photograph has been identified as Leonie Joseph, Eugene's sister.

Records relate to the Soldiers' Homestead Act, the Soldiers' Land Act, and the B.C. Returned Soldiers' Aid Commission. Types of records include correspondence, reports and memoranda; includes a proposal for soldier settlement in Stuart Lake District.

Correspondence, research notes and other material

Series consists of correspondence inward, reminiscences, diary of a trip through the Cariboo to Stuart Lake (1913); research notes and drafts of Howay and Scholefield's History of British Columbia. 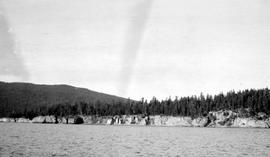 CALL NUMBER: T1061:0001
SUMMARY: These tapes comprise a series of unedited interviews with residents of Fort St. James, Hagwilget and Moricetown, recorded by CBC producer Norman Newton.
TRACK 1: DONALD GRAY, Sun Chief at Hagwilget, tells legends of Carrier prophet "Bini", as well as the origin of Saskatoon berries, and the relationship between men and animals. He then sings several songs and explains their meanings. DAVID DENNIS of Moricetown sings a song about "Bini", then a love song that he composed. LIZETTE HALL, a member of the Fort St. James Historical Society and the great-granddaughter of the famous Carrier Chief Kwah, tells the story of the first missionary, as told to her by her father. The Natives were afraid of him because, after seeing him lighti a match, they understood him to be a man made of fire.
RACK 2: Mrs. Hall continues by telling the story of how her father was first baptized at the age of four by Bishop Demers, and the impact of the missionaries on the community. She discusses her father's view on religion be;fore the white people came. Then JOHN PRINCE, who is the Catholic native chief, sings a song composed by Father Morice, and explains the song; then continues to sing several more songs. Mr. Prince tells several more stories, including how the first missionaries arrived, why the HBC named the local natives Carrier, and why natives no longer trap. John Prince expresses his regret at the loss of "old fashioned ways" and the negative impact of contact with "whites". Then he recalls his experiences as a child with Father Morice. This is followed by several more songs, and Prince's discussion of the conversion of the Carrier to Christianity. He adds that most natives are no longer interested in the church, and describes the difference among church law, state law and the Carrier religion.

CALL NUMBER: T1061:0002 RECORDED: [location unknown], [196-] SUMMARY: TRACK 1: Mr. ALEX McKINNON, a native sawmill worker at Fort St. James, discusses Carrier history, beginning with the arrival in 1842 of Catholic priest Father Demers and his half-breed Cree interpreter. He describes the native population at Fort St. James and their customs, and how the priest imposed monogamous marriages, including the story of a man who loved both of his wives but was forced to sell one. Then he describes later priests, and more on the life of native people at Fort St. James. Mr. McKinnon recalls an experience in 1946, when he was invited by Andy Paul, of the North American Brotherhood of Indians, to join him in Ottawa to speak on what natives wanted; problems with schools; how he was received in Ottawa. Then CHIPMAN WELLS, boat builder at Fort St. James, describes Fort St. James when he arrived in 1924, and his experiences as a boat builder. He continues to describe Stuart Lake; Fort St. James, and the impact of "whites" upon natives. TRACK 2: EVELYN M. HOY of the Fort St. James Historical Society tells the story of the murder of two German prospectors in 1930. The subsequent inquiry focused on native suspects, until the arrest in Alberta of a former companion of the prospectors. After several trials, he was acquitted. A few years later, he was arrested for possession of firearms and deported back to Germany. Mrs. Hoy was told that the German government, then controlled by the Nazi party, shot him for murder of three other people.

CALL NUMBER: T1061:0002 track 2 item 02 SUMMARY: After the last interview, there are some fragments of CBC Radio programs that were present on the tapes before the interviews were recorded over them. These begin with a musical excerpt from the program "Records for You" and an advertisement for the Devonshire Hotel in Vancouver. This is followed by an advertisement for the Grand Cafe in Prince Rupert, and an excerpt from the program "Talk of the; Town", described a "weekly sound picture of the city of Prince Rupert". This excerpt contains an interview with Tommy Black, Rotary Club past president and manager of the Northern BC Power Company, about the history, principals and goals of the Rotary Club. He mentions some accomplishments of the Prince Rupert local including helping start the nurses home, the public library, the Civic Centre,; and homes for seniors. The program concludes with an announcement of upcoming shows, including an interview with George Wilkins of Port Edward about his experience sailing from Honolulu to Tahiti, and with Eva Kirkwood Hackett about her long career in theatre. Group of Indians at Stuart Lake Indian Village At The Mouth Of Stuart Lake 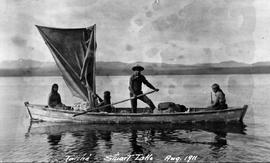 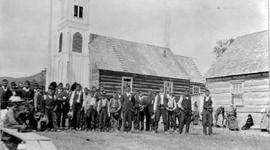 The item is a b&w photograph of people outside the Roman Catholic Mission at Stuart Lake. 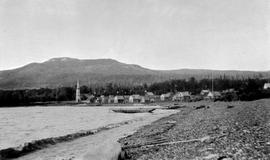 The item is a b&w photograph of the Roman Catholic Mission at Stuart Lake.

Start of a fishing trip on Stuart Lake 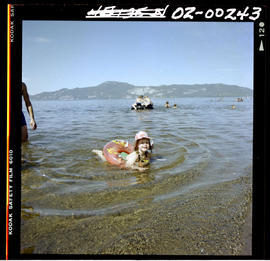 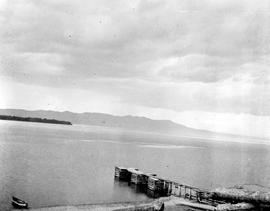 The item is a b&w photograph of Stuart Lake, taken from the flag pole at Fort St. James. Houses and canoes along beach. Family outside cabin in foreground. 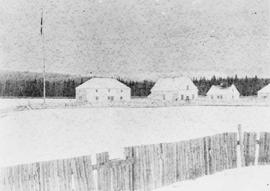 The item is a b&w photograph of a sunset on Stuart Lake.