Boatload of surveyors going down the Skeena River to Prince Rupert Professional land surveyors have played a key role in the development of British Columbia. Their work of delineating and describing lands within the province was essential for both orderly settlement and the administration of the province's ...

Corporation of Land Surveyors of the Province of British Columbia

The Drewry family fonds consists principally of the personal and business papers of William Stewart Drewry (1859-1939) and his son John Haworth Drewry (1894 – 1988). Both men were licensed surveyors who worked privately, and also for the B.C. gov... 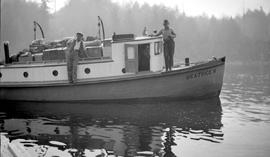 Forest Service; launch, Beatrice R.; on the Franklin River; surveyors Frank Swannell and A. Campbell aboard.

The fonds consists of records generated by Gerald Smedley Andrews in Victoria and other parts of British Columbia and Canada, and overseas, in pursuit of his personal, wartime, professional and volunteer activities from about 1903 to 2005.These ac...

Series includes letters in and out and well as bussiness correspondence, filed books, survey diaries and records relating to survey of the right-of-way of the Cariboo Highway. Also includes approx. 60 letters written to his parents while training...

Series consists of a diary, correspondence and accounts regarding survey of "Black Slate Deposit near Skidegate, Queen Charlotte Islands."

Includes letters in and out, including correspondence relating to surveys conducted for the Department of the Interior in the Rocky Mountains and Railway Belt, surveys for the B.C. government in Slocan and personal and business correspondence. Al...