"Key-map drawn by Mr. McKie to assist in the explanation or simplify the plan of the scheme shown on slide no. 75" 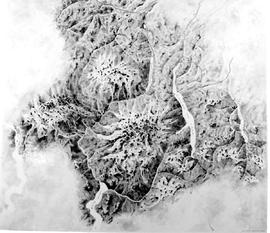 "Relief map made from the engineers notes by the Geographical Branch, of the Taseko-Chilko-Homathko project, or country covered by the project, or suggested development" Boatload of surveyors going down the Skeena River to Prince Rupert

Day book of expenditures and correspondence

Day book of expenditures of road and bridge construction, surveys and transport, 1862-1864; goods received from grocers, Hope, B.C., 1865; correspondence and specifications relating to the construction of the Burrard Inlet road, 1864-1865.

Records relating to map production, map distribution, personnel and staff salaries. Includes miscellaneous memoranda on resources along the route of the Pacific Great Eastern Railway (1936-1942) and a memorandum by F.C. Green on the Post-War Rehab...

Guides to the Surveys and Inventory Division maps and photos

The series consists of working documents, microfilmed from their three ring binder in 1965, used by the vault staff of the Surveys and Inventory Division as location guides, finding aids and loan sheets, mainly for maps and air photographs. The c...

The "0" series correspondence files contain general inquiries about surveys, leases, and other matters pertaining to lands. The records were transferred in 1982 from the Surveys and Land Records Branch of the Ministry of Lands, Parks, an...

Letterpress reference books of surveyed land, usually including name of land holder and lot number. The entries are arranged by land district for each reporting date. These lists were published later as notices in the British Columbia Gazette. ...

The series consists of photographic prints generated by surveying parties operating in various parts of British Columbia between 1901 and 1976. The photographs were usually taken from the summits of hills and mountains and depict surrounding land...

Scene of mining and surveying operations

The series consists primarily of small, hard-cover notebooks used for recording data in the field during hydrographic survey projects. It also consists of envelopes containing various textual and cartographic records. The purpose of the records wa...

The series consists of glass plate photographic negatives generated by the Surveys Branch's topographical surveying parties operating in various parts of British Columbia between 1914 and 1929. These survey parties used photographs as a means...