A small settlement by the sea

A totem figure at Alert Bay, BC. The item is a black and white photograph of Alert Bay taken in August 1903 by an unknown photographer. The view is from the water and show the village, beach and totem poles. One watercolour on paper of Alert Bay, B.C. People walking along boardwalk in front of houses. View along road. Two boys standing next to pole.

The item is a black and white photograph showing a long house with pole at Alert Bay. Written underneath the photograph in the album: Tua-tem = my friend (vernacular). One painting of monumental pole and house fronts. Amateur film. B&W: views of Arrow Lakes scenery from a sternwheeler; arrival; the "Minto" at dock. Two men travelling by packhorse in the Lardeau. The steam tug "Beaton". Sequence on gold mining in the Cariboo, with footag... 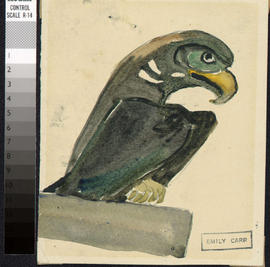 Detail of top figure on house post, Alert Bay, BC.

One watercolour on paper.