The item is probably a work print of a promotional film, made 1958-1959. It reflects the industrial growth of the province as represented by its first international trade fair in May 1958. A French language version was produced for European distribution.

The item is a composite print of a promotional film which depicts the 1961 BC International Trade Fair. Footage shows interior of exhibition halls, preparation of displays, special events; Premier W.A.C. Bennett at the fair; airliners arriving at airport; freighters unloading. Also promotes the forthcoming 3rd BC International Trade Fair in 1964. A French version was also released.

Out-takes. The BC Lions football team is shown at practice and playing a night game at Vancouver's Exhibition Park against an unidentified visiting team.

Item consists of one group portrait of unidentified women and men posed on a set of outdoor steps.

"Photo by M.L. Hawksley - 623 Hornby St" is captioned in the bottom left corner.

The item is a composite print of a promotional film made in 1976. The film follows a group of American investors as they take a brief trip around B.C. to examine the province's economic opportunities and potential, its resources and markets. The province's major industries (forest products, mining/smelting, fishing/canning, agriculture) are discussed, and the importance to industry of B.C. Hydro's electrical energy resources is highlighted. Includes sequences on Vancouver, shipping facilities, B.C. Ferries, Victoria and area, Bennett Dam, Site One, Mica Dam project construction, Kootenay Canal, Hat Creek coal deposits and exploration, export/trade with the Pacific Rim, and Roberts Bank coal port.

The item is a promotional video from 1985. It is a program about B.C. Transit. Includes shots of buses and bus drivers; a Seabus leaving the North Vancouver terminal; Skytrain and Skytrain track construction.

Documentary. The potential health hazards posed by environmental pollution in B.C., and the work of the Public Health Service and Pollution Control Board. Includes scenes documenting various sources of air and water pollution; sewage treatment; field testing of air, water, shellfish to determine health dangers, etc. Begins with a speech by Premier W.A.C. Bennett on the importance of keeping B.C. beautiful, despite the demands of progress.

The item consists of a kinescope of the August 5, 1954 CBC coverage of the British Empire and Commonwealth Games, sponsored by Northern Electric. Events reported on include: rowing finals from the Vedder Canal (Prince Phillip in attendance, Canada wins gold medal in the eights); boxing from the Forum; wrestling from Kerrisdale Arena; fencing from Lord Byng High School gymnasium; lawn bowls from New Westminster; track and field from Empire Stadium; and swimming from Empire Pool. Includes ad inserts for Northern Electric flash bulbs and kitchen appliances.

The record consists of a photograph album created by Charles De Mara to commemorate his visit to the British Empire and Commonweath Games held in July and August 1954 in Vancouver.

The album contains 11 colour and 94 black and white photographs of various events at the games including opening ceremonies, diving at the Empire pool (University of British Columbia), boating events at Vedder Canal and track and field events. The field event photographs include some of the famous "Miracle Mile" run where both Roger Bannister and John Landy ran the mile in less than four minutes. Each photograph has a caption, a date and often additional information about the event photographed. The black and white photographs have been numbered with two identifying numbering systems; a straight sequential number from 1 to 94, and a composite number that may refer to a negative film and item number.

There are also 11 black and white commercial postcards probably purchased by De Mara and glued in the album with the photographs. The postcards are not numbered.

The album also contains event tickets, programs and various souvenir guides and has a souvenir cloth crest glued into the inside front cover.

"Broadway and Heather Streets, Vancouver, after the flood"; road and sidewalk have been undermined. 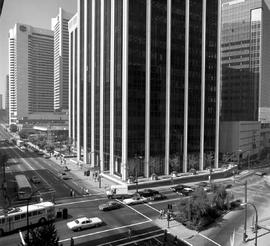 Out-take. One unused shot from the film SUITE TWO.

Agreement for employment between Simpson, Roberts and Company of Liverpool and Edgar Osman Cornish of Vancouver, 9 May 1912; an application for a loan by John Wallace of Butedale and Marion Hunter of Liverpool (1914) and correspondence regarding the loan.