Constituting an ethnic difference : an ethnography of the Portuguese immigrant experience in Vancouver / Alison Isobel Boulter

Are we at the crossroads? : reminiscences of Gerald Ross Hunter

The file consists of a typescript copy of the reminiscences of Gerald Ross Hunter titled "Are we at the crossroads?" Mr. Hunter was born in England, emigrated to Wynyard, Saskatchewan, moved to British Columbia in 1937 where he and his wife operated a motel on Kingsway in Vancouver, and then lived in the Fraser Valley and in Victoria.

The origins of the NPA: A study in Vancouver politics, 1930-1940 / Andrea Barbara Smith

The development of professional theatre in Vancouver / Peter Frederick Guildford

The item is a microfiche copy of a thesis by Peter Frederick Guildford titled "The development of professional theatre in Vancouver." vi, 198 leaves. Thesis (M.A.), University of British Columbia, 1981. Vita. Bibliography: leaves 109-110. Canadian theses on microfiche, 55021.

Origin and development of newspapers in Vancouver / Bessie Lamb

The item is a typescript copy of a thesis by Bessie Lamb titled "Origin and development of newspapers in Vancouver." v, 111 p, tables. Thesis (M.A.), University of British Columbia, 1942. Bibliography: p 96-111.

False Creek Development: a study of the actions and interactions of the three levels of government as they affected public and private development of the waterway and its land basin / Dennis Michael Churchill

The item is a typescript copy of a thesis of Dennis Michael Churchill entitled "False Creek Development: a study of the actions and interactions of the three levels of government as they affected public and private development of the waterway and its land basin." ix, 234 leaves: maps. Thesis (M.A.), University of British Columbia, 1953. Bibliography: Leaves 231-234.

The file consists of a letter to J.E. Vaz of the Jewish Federation in Montreal, written by J. Howard T. Falk, Executive Director of the Vancouver Council of Social Agencies, dated August 1, 1932. The letter includes an 8 page report of the committee on homeless men dated July 1932. The report, which includes a survey of Vancouver agencies providing assistance to homeless men, also makes recommendations in the area of local and national policy. This report was one of many copies sent to cities and agencies across Canada to encourage support for the recommendations contained within and to ask that these agencies take their suggestions directly to the Prime Minister of Canada.

Weiss, Gillian Margaret. As women and as citizens: clubwomen in Vancouver, 1910-1928

"British Columbia: of their doings there by one of them." Manuscript account of a journey from London, England to Vancouver B.C. and back August 28 - October 6, 1897. Contains photographs, maps, menus, passenger lists and programmes. Visual Records accession, 198608-6.

Purchased from the National Library, 1987.

The item is a microfiche copy of a thesis by John Douglas Belshaw. It is titled "The administration of relief to the unemployed in Vancouver during the great depression". ix, 161 p: figs., maps, tables. Thesis (M.A.), Simon Fraser University, 1982. Bibliography: pages 146-161.

Purchased from the National Library, 1987.

The file consists of a photocopy of Mary Isabella Roger's reminiscences of her journey to Victoria from England in 1885, and visits to Vancouver from Victoria including one made to see the arrival of the first transcontinental train.

A letter to members of the British Columbia Legislature relating to performance of music in licensed premises, copy of an excerpt from the "International Musician", January, 1928, relating to immigrants being allowed to work in the US entertainment industry and galley proofs of revision of the constitution and by-laws of local no. 145.

Sikh in the Vancouver region: a descriptive study of certain Sikhs' views of education since 1904 / Balijeet Dhaliwal

The item is a microfiche copy of a thesis by Baljeet Dhaliwal titled "Sikh in the Vancouver region: a descriptive study of certain Sikhs' views of education since 1904." vii, 78 p: figs. Thesis (M.A.), Simon Fraser University, 1985. Bibliography: p 73-78.

Captain Thomas Gilchrist (1904-1981), seaman and writer, wrote articles, short stories, radio plays, television plays and documentaries from the late 1940s to the late 1970s. The collection includes examples of his work as well as clippings and biographical information about his life and writing career. Captain Thomas Gilchrist was born in Scotland and spent most of his life at sea. He apprenticed as a cadet at fifteen and qualified as a Master Mariner by twenty-five. During the interwar years he sailed with various shipping lines in many parts of the world; he also commanded a rescue boat off the coast of China during the Nan King Rebellion of 1925. During World War II he served with the United States merchant fleet in support of military campaigns in the South Pacific. In 1946 he moved to Vancouver and mastered deep sea vessels for Vancouver-based shipping companies. In Vancouver, Captain Gilchrist married and eventually retired from the sea. Since the 1930s he had been writing about his sea-going adventures as a hobby. Then, in the late 1940s, he succeeded in placing short stories in mariner's periodicals and adventure magazines that published in Canada, Britain, Australia and the U.S.A. In the early 1950s he began writing radio dramas for the Canadian Broadcasting Corporation (CBC) in Vancouver. Radio soon became a full time outlet for his writing interests and led him to retire from the sea in 1953. During the 1950s his plays appeared on the CBC radio's "Vancouver Theatre", "Pacific Playhouse" and "CBC Wednesday Night". He also wrote the series "Tales of the Seven Seas", "Tales of Fiddler's Green" and "Marine Investigator". "Marine Investigator" was set in Vancouver and based upon the cases of fictitious private detective Don Grey who specialized in harbour related crimes. It was perhaps his most successful series, running from 1953 to 1958. In the late 1950s he wrote several television plays that were broadcast on CBUT (CBC Vancouver) as well as a three-part documentary about Vancouver harbour entitled "Port Watch". During the 1960s Captain Thomas Gilchrist's writing tapered off, although he wrote his longest work in the mid-60s, a novel, which he never submitted for publication. Instead, he returned to sea and resumed captaining ships until he suffered a stroke that prevented him from future deep sea work. In 1969 he skippered the "Monte Cristo", a replica of an 18th century ship, on its inaugural voyage along the B.C. and U.S. Pacific Coast, but that was his last major voyage. Although shore-bound, he continued to take an interest in marine affairs, including attempts to revive Canada's merchant marine. Failing health necessitated a move to a nursing home in 1977; there, he wrote a few unpublished pieces before he passed away in 1981.

While this collection is small, it presents a cross section of Captain Gilchrist's writing, including short stories, radio and television dramas, non-fiction articles, the draft of his novel, notes and lists. It also includes newspaper clippings and publicity material that contain biographical information. It provides a broad base for the study of Captain Gilchrist's career as a writer and, to a lesser extent, as a seaman, and for the study of Canadian broadcasting, popular culture and other subjects.

The Captain Thomas Gilchrist papers have been described to the item level. As there was no original order to the files, they have been grouped for convenience into the following basic categories: short stories; radio and television plays; novel; and miscellaneous. A rough chronological order was applied. Short stories by Gilchrist that were part of commercial magazines were photocopied and placed in individual files; the magazines were returned to the donor. Photographs from the collection have been segregated and are awaiting re-housing by Preservation Services (07/02/00).

Related records include audio recordings of seven episodes of the Marine Investigator series and other radio plays in the John Emerson Collection (Tape Accession 4356) and the Don Mowatt Collection (Tape Accession 4303). In addition, Concordia University's Broadcast Studies Centre has preserved over 100 Gilchrist radio scripts that it acquired from CBC Vancouver in 1976. These are indexed by microfiche NW 016.8222/F499, Canadian National Theatre on the Air.

The collection represents only a small portion of Captain Gilchrist's work; according to his wife, Wynne, he cleared out most of his papers shortly before his death. She subsequently donated the remaining records to the B.C. Archives and Records Service in August 1992. 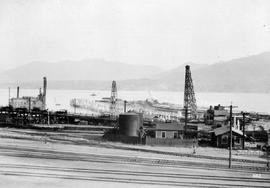 Piers B, C under construction

The record consists of a photograph album created by Charles De Mara to commemorate his visit to the British Empire and Commonweath Games held in July and August 1954 in Vancouver.

The album contains 11 colour and 94 black and white photographs of various events at the games including opening ceremonies, diving at the Empire pool (University of British Columbia), boating events at Vedder Canal and track and field events. The field event photographs include some of the famous "Miracle Mile" run where both Roger Bannister and John Landy ran the mile in less than four minutes. Each photograph has a caption, a date and often additional information about the event photographed. The black and white photographs have been numbered with two identifying numbering systems; a straight sequential number from 1 to 94, and a composite number that may refer to a negative film and item number.

There are also 11 black and white commercial postcards probably purchased by De Mara and glued in the album with the photographs. The postcards are not numbered.

The album also contains event tickets, programs and various souvenir guides and has a souvenir cloth crest glued into the inside front cover.

Series consists of 20 posters of various sizes, some in colour but most are printed or copied with black ink only. Many of the posters announce events presented or sponsored by the Progressive Workers' Movement (P.W.M.). Numerous are protesting the Vietnam War.

Vancouver and vicinity in the 1920s and 1930s : [compilation tape for display use]