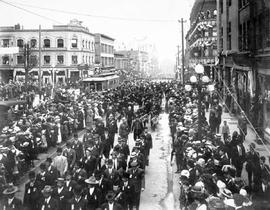 Amateur film. Unedited film of Remembrance Day parade, observers and ceremony at Victory Square in Vancouver, including laying of wreaths. Other shots include children on field gun exhibit and woman in Red Cross uniform. Some of this footage may have been used in FOR ALL WE HAVE AND ARE.

Dominion Day; Cordova Street at the corner of Cambie; Vancouver

Don't miss it for the world Special event footage. "Parade marching along Hasting Street. American band (?). Highland band. Shriners. Pageant in Stanley Park (colour): ladies in crinolines. This may have been a PNE parade, but is not identified. MAY DAY PARADE: This is quite exciting, and contains groups of men and women marching under several different banners. The banners read, in order: "Stop Hitler -- Save Peace"; "[?] Support Democracy"; "Mackenzie-Papineau Battalion"; "White Lunch - Eden - Waldorf - On Unfair List"; "Communist Party of Canada -- B.C. District - Jobs - Recovery - Democracy and Peace"; "Relief Project Workers Union Workers Demanding Jobs"; "Spain Vets - Welcome Home"; "We Are Against Militarisation -- The Youth"; "Demand Hands Off Yugoslavia -- Yugoslavian Progressive Movement"; "Down With Imperialist War"; and "Bread Not Bullets". The film also shows a newsboy selling the "People's Advocate" newspaper, and a group from the baker's union, as well as several bands." (Colin Browne)

Out-takes. A record of the 1956 PNE in Vancouver. These outs include general views of Exhibition Park, miscellaneous scenes on the fairgrounds, the midway games and rides, the Miss PNE pageant, agricultural exhibits, the dog show, a fashion show and the horse races, as well as the PNE parade.

Item consists of one photograph of groupings of men and women standing near the intersection of Hastings Street and Cambie Street in Vancouver. They are watching a parade of horse-drawn floats. A Young Men's Christian Association (YMCA) building is visible in the background, at centre.

Out-takes. "Arrival of 'Princess Marguerite' off Victoria, carrying King George VI and Queen Elizabeth. Fireworks. Good shot of B.C. Provincial Police lined up on their horses. Small boats milling about under Lion's Gate Bridge. Stern of the 'Prince Robert' at wharf. Soldiers in scarlets and busbies parade on wharf. King and Queen arrive, inspect Guard and leave aboard the 'Prince Robert'. In the sky, words read: "Will ye no come back again?" Three planes fly in formation overhead. King and Queen drive through stone gates. Girls perform Maypole dance. Kids with Union Jack wave and cheer. Vets look on. Banner over arch: 'Welcome to the Municipality of Maple Ridge.' Another banner: 'Coquitlam welcomes Our King and Queen.' More banners. Train entering Vancouver. Parliament Buildings, Empress Hotel and Beacon Hill Park, Victoria, 'Prince Robert' and two destroyers sail under the Lion's Gate Bridge. This reel does not tell a coherent story but is rather a collection of various scenes around Vancouver and Victoria in no particular order." (Colin Browne)

Footage. Several views of the parade commemorating Vancouver's 50th anniversary as a city. The parade proceeds over Georgia Viaduct and along Granville, Pender and other streets. The floats have a strong pioneer theme.

Footage. Miscellaneous shots. The liner "Empress of Japan" and a West Vancouver Ferry pass through First Narrows; Burrard Street Bridge opening and crowds; a seaplane at Coal Harbour; a pet bear; high pan of Vancouver from the north shore; a May Day celebration with Lt. Gov. Hamber and other dignitaries, followed by a parade [New Westminster?].

Footage. Miscellaneous subjects, including shots of downtown Vancouver streets, the Marine Building, the CPR station, a parade, and a Bristol Bitannia (a four-engined turbo-prop) airliner at Vancouver Airport. Also includes an unrelated sequence that shows hunters taking a butchered animal carcass from the back of a pack horse and loading it into a station wagon.

The item is a composite print of a promotional film made in 1947. It shows the celebrations marking Vancouver's 60th anniversary to provide a framework for a short history and description of the city. Jubilee events include parades, a pageant at Timber Bowl in Stanley Park, First Nations dancing and the induction of the Governor-General (Viscount Alexander) as an honorary Kwakiutl chief. There are historical photographs which show Vancouver's early development. Vancouver; Dominion Day parade at the corner of Cordova and Cambie Streets

Newsreel footage. "With ravages of hate and war brewing in Europe, a huge pageant is held in [Vancouver], and men of the Canadian Militia, veterans, lumbermen organizations, Wallace shipyards, Orangemen, and various other groups parade through the city. Floats represent City of [Vancouver], firemen, police and public utilities, E.H. Heaps & Company, [North West Mounted Police], and many others." (Colin Browne)

Amateur film. "The footage . . . shows a parade, mounted in the early days of World War II, marching down Granville Street, shot from a window high up in the original Eaton's building. All the while a Union Jack flutters back and forth across the window. Scenes include a float with a world globe and Union Jack, soldiers marching, clowns with batons, floats with soldiers and a plane, a fighter plane, and various trucks, marching men, soldiers and bands. At the end there is a shot of Granville Street and pedestrians from street level." (Colin Browne)