Account book, including lists of members of the Albion Cricket Club of Victoria.

"Beginners Please: My Life in Amateur Theatre". Reminiscences of author's boyhood in Bolton, Lancaster, and early interest in amateur theatre, 1914-1948; account of immigration to New Brunswick and theatrical work in Fredericton, 1...

Records of the Victoria Branch of the British Columbia Society for the Prevention of Cruelty to Animals (BCSPCA), 1909-1943 and 1952-1980. The collection consists of minutes, committee reports, financial statements, annual reports and clippings.

Bulletins and other material

Series consists of Society Bulletins (1936-1941), briefs to government, newspaper cuttings, plus correspondence and notes re: opposition to encroachments on Beacon Hill Park, 1942.

Le Club Canadian-francais de la Colombie-Britannique was formed in Victoria in 1941. In 1970, its name was changed to le Club Canadien-francais de Victoria, and in 1982 to La Societe francophone de Victoria.The collection consists of minutes, 194...

One letter, a note on the origins and purpose of the society, brochures, newspaper clippings. Three photographs have been deposited with Visual Records.

Constitution, as adopted at general meeting November 9, 1891, and membership list..

Series consists of correspondence inward and a statement concerning a point system of print evaluation. Interior view of the German Club on Government Street, Victoria

The James Bay Athletic Association [JBAA], the oldest Canadian amateur athletic organization west of Montreal, dates from 1886 (inc. 1890). Early records include: minutes, 1927-1930 and articles of incorporation 1927. Most of the unit spans the...

Rules, brief history, lists of officers and committees and names of people serving. The Kinette Club formed an auxiliary to the Kinsmen Club.

Margaret (Leighton) McMicking was the wife of Robert Burns McMicking, a Victoria businessman who owned the Victoria and Esquimalt Telephone Company.Records include scrapbooks of clippings; a postcard album; an autograph album; two notebooks kept i... 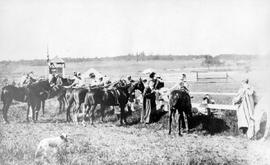 Meeting of the Victoria Hunt Club at Willows racetrack

Series consists of a minute book.

Minute books and other material