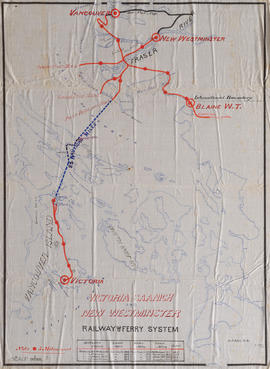 65 cm of textual and cartographic material

The Victoria, Saanich and New Westminster Railway Company began operations in August 1888 with the first meeting of the Board of Management. The company was formally incorporated on 20 March 1889 by a private bill in the Parliament of Canada. Having failed to begin construction on the railway within the designated two year period, as stipulated by the Railway Act, the company was re-incorporated in 1891. The aim of the company was to construct a rail and ferry link between Victoria and New Westminster, which would depart Vancouver Island from Swartz Bay and arrive on the mainland near Canoe Pass. The Victoria terminus station was envisioned to be located on Section 48, Victoria District, on Cedar Hill Road. The company failed to secure the necessary funding and did not complete any portion of the construction. Although the dissolution date of the company is not known, based on the business records, the company appears to have ceased operations around 1891.

The fonds consists of the business records of the Victoria, Saanich & New Westminster Railway Company (VS&NW). The records document the failed attempts of the company to construct a rail and ferry link between Victoria and New Westminster and consist of meeting minutes, correspondence, financial records, lists of share holders, maps, by-laws, and various other business records. The records document exchanges between the company and engineers as well as the company and different levels of government (municipal, provincial, and federal), specifically in the company's attempts to secure funding. Amor de Cosmos was the founder of the company, however John Stuart Yates, the secretary, appears most frequently throughout the records.

The records came to BC Archives in one large metal trunk with no discernible order. Documents kept together within envelopes have been maintained together either by individual folder, enclosed in acid free paper, or by paperclip. The records have been arranged by archivist roughly by type, but no hierarchical structure has been imposed. Maps were loose among records and have been separated according to storage requirements.

Records are in the public domain