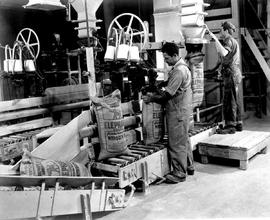 The fonds consists of the records of Cominco Ltd., including those created under its previous name, the Consolidated Mining and Smelting Company of Canada Limited. Most of the records were selected by Cominco from its offices in Vancouver and Trail, B.C.

The fonds includes textual records, approximately 8700 photographs, maps, films and sound recordings which include oral histories with former employees. The records document the industrial activities, personnel, and the social history of the communities where the company was active.

Topics and locations reflected in the records include but are not limited to: Trail area operations at Warfield and Tadanac; the Sullivan mine at Kimberley; the Bluebell mine and concentrator at Riondel, B.C.; the Con mine in Yellowknife, N.W.T.; the H.B. mine and concentrator at Salmo, B.C.; Calgary facilities for production of ammonia, ammonium nitrate and urea; Benson Lake (Vancouver Island) mine and concentrator; the mercury mine at Pinchi Lake, B.C.; the Box mine at Goldfields (Athabaska Lake) Saskatchewan; Wedge copper mine at Newcastle, New Brunswick; Pacific Coast Terminals Limited operations in warehousing, docking, loading and shipping at New Westminster and Port Moody, B.C.

The records document Cominco’s operations in fields such as zinc die casting through the purchase of National Hardware Specialties Limited and its plant in Dresden, Ontario. The records reflect the continuing research and development carried out at Trail, and, after the mid-1960s, at the new research centre built at Sheridan Park, Ontario.

Records of subsidiaries and affiliates include those of operations in the United States and overseas. These include but are not limited to: Cominco Products, Inc. a wholly-owned subsidiary created to carry out fertilizer warehousing, liquid fertilizer conversion and product marketing at Spokane, Washington; the development of phosphate rock mining interests in Montana; the Magmont lead mine and concentrator at Bixby, Missouri; Rubiales mine, Lugo Province, Spain; the Black Angel mine and concentrator, Marmorilik Fjord, Greenland; and Cominco Binani Zinc Limited (CBZL) in India.

Photographs and textual records document the important role played by Cominco, beginning in the 1920s, in exploring the northern regions of the four western provinces and the Northwest Territories. The company pioneered aircraft prospecting which led to the discovery of gold, uranium, oil and copper. Exploration by Cominco influenced settlement patterns and laid the foundation for the creation of an aviation service in northern Canada.

Other notable records include those concerning the international dispute between Canada and the United States over pollution from the Trail smelter and its effects on the agricultural lands in the U.S. Cominco was involved in an international tribunal in 1932 (Trail smelter dispute) as a consequence of sulphur-bearing smoke damage to crops. See file of negative filmstrips titled Smoke Control – Mathews films Tribunal Case 1932 [photographs]. Among other topics the photographs appear to include images of areas in Idaho and Washington State. They are possibly connected with MS-2500, box 457, file 1, “Survey of agricultural conditions (Mathews) - appendix D8”, dated 1935. SUPPLIED TITLE OF TAPE(S): Early Cominco-Trail history PERIOD COVERED: 1916-1955 RECORDED: Vancouver (B.C.), 1977-07 SUMMARY: TRACK 1: Born in PEI in 1890; went to Seattle and worked as a plumber; came to Vancouver and went to Trail in 1916; worked in Rossland installing a heating plant; went to work at Ainsworth in the power plant for Number 1 Mine at Centre Star; came back to Trail. His impressions of Trail, including the wooden sidewalks; vegetation; the pollution caused by the smoke and what was done to prevent it; population and makeup of peoples; the production of acid for fertilizer ("Elephant Brand"); schools and quality; community and Trail holidays. Then went to Warfield; his first Impressions. TRACK 2: Employee/employer relations; brief mention of Tadanac; beginning of the union; working conditions and how they changed after the union; unionist Harvey Murphy; change in security during the Second World War, and problems associated with it; plant during the Second World War; women worked; various personalities, including S.G. Blaylock, George Murray, R.W. Diamond; safety precautions.

SUPPLIED TITLE OF TAPE(S): Early Cominco-Trail history PERIOD COVERED: 1912-[1948?] RECORDED: Vancouver (B.C.), 1977-08 SUMMARY: James Herbert Martin arrived in Canada in 1912 from England; worked on a farm in Fleming, Saskatchewan. Came to Trail in 1921, where he obtained a job in a labour gang with a Mr. A. Hector; worked eight hours a day, seven days a week. Worked as a switchman, then a motorman, and finally as a shift boss; know two aldermen of the city, Martin and Milliken. Trail was very dry and had numerous fires. The Depression was difficult for everyone, especially single men. Wartime was also difficult; women were brought into the plant to work; heavy water was produced at Warfield. The union organised by Harvey Murphy brought administrative difficulties, but better salaries; early concessions lost; pension plan improved. Because of pollution, the company had to continually replace fences throughout the town. Intermittent flooding of rivers. The flood of 1948 caused a crisis.

SUPPLIED TITLE OF TAPE(S): Early Cominco-Trail history PERIOD COVERED: 1924-1964 RECORDED: Delta (B.C.), 1977-07 SUMMARY: Born in England; serviced planes during the First World War; arrived in Trail in 1924; worked as a machinist at the Cominco machine shop. Weather and pollution in Trail. Schools and population in 1924. Went to new Warfield plant; discussion of chemicals and fertilizers; mention of Mr. Varsueld, supervisor, and Herb Clark. [Served?] as an alderman in Rossland; social life while working in Trail; mention of Alec Hector and Joe Filippelli; details of shopping and conveniences in Trail; hospital and arena. Trail and the plant during the Depression, and during the Second World War; immigrants; women workers. Company spirit; hours and holidays at the plant; workmen's committee; union; safety conditions; more on Warfield; stories on Blaylock, Archibald and company airplanes; George Murray.

The mining and metallurgical operations of the Consolidated Mining and Smelting Co. of Canada, Ltd.

The item is an industrial film print made ca. 1977 from footage originally shot between 1934 and 1936. The compilation shows the company's mining, smelting and related operations in southeastern British Columbia including: the Sullivan Mine and concentrator at Kimberley; a power plant on the Kootenay River; the Trail smelter; and the fertilizer plant at Warfield. 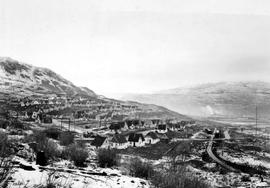 The town of Warfield. 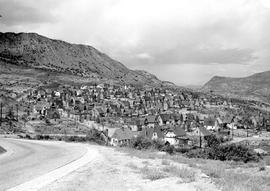 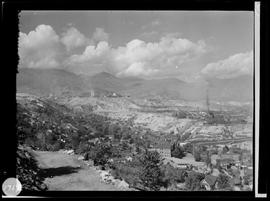