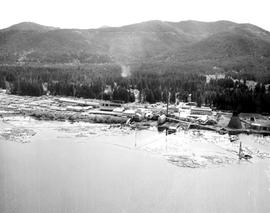 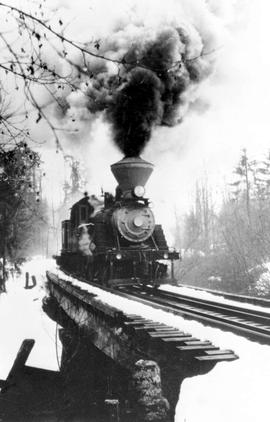 ca. 17 m of textual records and other material

The first predecessor company of Western Forest Industries Ltd. was McDonald Murphy Logging Co. Ltd., a company formed by Neil McDonald and Hugh D. Murphy, and previously active near Campbell River, B.C. The company operated in the Cowichan Lake area from 1923 to 1933, owning or controlling much of the timber lands in which Western Forest Industries Ltd. would later operate. In 1928-1929 McDonald and Murphy extended a railroad system from Honeymoon Bay to the upper reaches of the Gordon River (to the camp later known as Rounds), to provide a route for transporting logs. Timber was loaded onto railcars and pulled by steam engine to a log dump at Honeymoon Bay. Logs were towed to Lake Cowichan then transported by rail to Crofton; from there they were towed to the Fraser River when they were sold on the open market.

A victim of the Depression, McDonald and Murphy faced foreclosure, and in late 1933, sold their company to Ralph Madison Rounds and Harold Ware Hunter. On December 2, 1933, Rounds and Hunter incorporated Lake Logging Company Ltd., with the head office in Vancouver. Lake Logging Company Ltd. became one of the main supports of the economy of the Cowichan district and one of the largest forest companies on Vancouver Island. In 1936 the company built a small sawmill at the village of Lake Cowichan. In 1942, responding to demand for timber for the war effort, the company completed a new, large, all-electric sawmill at Honeymoon Bay, one of the most modern in the province. Principals in the company included members of the Rounds family of Wichita, Kansas. Other principals included Harold Ware Hunter, John Ware Hunter and Walter Delong in Washington State, and Karl Scott in Vancouver.

Logging operations were expanded at the old McDonald Murphy logging camp on the Gordon River. The latter was renamed for Ralph M. Rounds family name; a post office (Rounds, B.C.) was open from 1936 to 1948. By 1942 the company was continuing to use its 15 miles of railway to transport logs to the lake, but started to build truck roads to reach timber inaccessible by rail. In addition to the principal camp at Rounds, the company had a subsidiary logging operation at Cowichan Lake, the Hill Logging Co. Ltd., which had taken over the former Japanese-owned Ocean Timbers Ltd. Other operations of the company included logging at Meade Creek, and operating the mill of Mayo Bros. Timber Co. at Paldi, near Duncan, B.C. The company name was changed to Lake Logging and Lumber Ltd. on October 5, 1944.

The Lake Logging and Lumber Ltd. assets which were transferred to Western Forest Industries Ltd. included the shingle and sawmills at Honeymoon Bay, timber stands and logging operations at Cowichan Lake, the mill at Paldi, and booming grounds at Crofton. The timber assets were some of the largest stands of accessible timber on Vancouver Island. The logging camp at Rounds employed 200 workers, while mill employees numbered 300. Western Forest Industries Ltd. also had subsidiary companies, which included: L & M Machinery Co. Ltd. (incorporated December 28, 1949) and Island Wharf and Dock Co., which operated at Chemainus, B.C.

In 1947, at Honeymoon Bay, WFI undertook a major expansion, building new company houses for employees, a community hall, a park and other recreation facilities. The company closed Rounds camp and continued a westward move in logging. At the fork of the Gordon River and Hauk Creek, the company built a new camp to be called Gordon River.

It is generally accepted that the Koerners introduced progressive practices in the B.C. forest industry, including new amenities for workers. Under the Koerners’ direction, both Honeymoon Bay and Gordon River camp were developed into the most modern company communities in the province. By 1958, the Honeymoon Bay mills employed 475, and the Gordon River and Meade Creek camps employed 350.

Through the 1950s, WFI was a subsidiary of Alaska Pine, which was controlled by Rayonier. By 1959, Rayonier had purchased the balance of the stock of the company, and on September 16, 1959 the Alaska Pine and Cellulose Ltd. name was changed to Rayonier Canada Limited.

In 1966 Rayonier Canada reported that it continued to hold 60 per cent interest in its affiliate, WFI, which employed 572 people in its logging, sawmill and shingle mill operations.

In December 1967 the boards of Rayonier and the International Telephone and Telegraph Corporation (ITT) approved a merger proposal, and in March 1968, stockholders of Rayonier, Inc. voted approval for the merger of their company into ITT. The new company, ITT Rayonier Incorporated, was a wholly-owned subsidiary of ITT. Western Forest Industries Ltd., through its subsidiary relation to Rayonier Canada, was now part of a major international conglomerate.

In the late 1970s, the total payroll of Western Forest Industries Ltd. was over $5,000,000 per year, with 300 employed under normal operation in its plant and woods divisions. Mill employees were members of the Duncan Local 1-80 of the International Woodworkers of America. The Honeymoon Bay plant consisted of several mills, with operations including: hydraulic barker, the large log sawmill (band mill), small log sawmill (gang mill), shingle mill, planer mill, yard and shipping, and chipper mill. The company maintained a townsite of 80 dwellings, including two and four-bedroom houses, with all service maintained by the company. It included a community hall, dining room complex, a non-denominational church, ball park, tennis and badminton courts, lawn bowling, and playgrounds. The company also maintained a public beach and a wildflower reserve. The plant and community had fire protection from its own 20-man volunteer fire department.

WFI was, briefly, a subsidiary of Western Forest Products Ltd. In October 1981, the Honeymoon Bay plant and logging operation at Gordon River were closed permanently. WFI officials stated that the plant, given its age, was uneconomical. The company also cited the decline in demand for wood products (due to low housing starts and high interest rates), a virtual depletion of mature timber on private lands, and a lack of uncommitted timber in the region. The mill was demolished in 1982, and the company houses at Honeymoon Bay became privately-owned. WFI became inactive except for the sale of timber holdings in the Cowichan Lake area.

Some records, including MS-1333, were presented to BC Archives by Donald Hammond, Manager and Vice-President of Western Forest Industries Ltd., in 1982. Records in MS-2182 and MS-2187 were donated in 1984 by Hammond and Barry Volkers (also an employee of Western Forest Industries). In May 1984, two photographs, G-03160 and G-03161, (accession 98407-15) were donated by Barry Volkers when he was associated with the Kaatza Historical Society, Lake Cowichan.

In 2013, records (including three volumes, 11 maps and plans, and 1 poster) were transferred from RBCM Human History to BC Archives.

The fonds consists of company business records which relate to the full range of its activities in logging, lumber and shingle production, and marketing of its products. Most of the records concern the plant at Honeymoon Bay, the logging camp at Gordon River, and the facilities and residences built for employees at those locations.

The fonds includes records of predecessor companies (records created prior to the founding of Western Forest Industries Ltd. in 1946). It also consists of records of the companies that had majority ownership of Western Forest Industries Ltd., including Alaska Pine and Cellulose Ltd. and Rayonier Canada (B.C.) Limited, (and the owner of the latter, after 1968, ITT Rayonier Incorporated).

The fonds also consists of technical and architectural drawings, blueprints, maps and plans; these are in two different series: CM/ES4 and MS-1333.K. Most of the maps and plans relate to land, timber holdings, and logging and forestry issues. The technical drawings and blueprints relate to mills and mill equipment, and to buildings and facilities for the worker communities at Honeymoon Bay and Gordon River. Some of the maps, plans and drawings were created by predecessor companies prior to 1946.

The fonds also consists of ca. 900 photographs (colour and black & white), including prints, slides, and negatives. (Many of the latter are undeveloped). The images include the Honeymoon Bay plant, townsite and environs, workers, equipment and logging locations.

Series descriptions and file lists are available. An item-level description of the film footage is available from the BC Archives online catalogue.

Related materials:
From 1954 to 1980 the controlling interest in Western Forest Industries Ltd. was Rayonier Canada Limited. Other fonds in BC Archives which contain Rayonier Canada records are PR-0468, PR-2326 and PR-0126.

The series MS-3137 - Administrative office files, was arranged, described and added to the fonds in August 2014.

Moving image and/or graphic material originals may be in cool or cold storage. Contact staff for specific details.