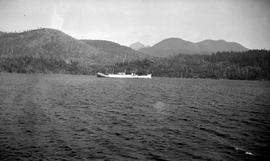 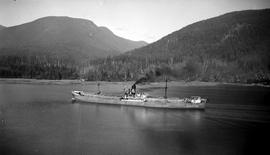 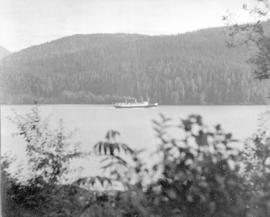 The item is a b&w photograph of a ship in the Alberni Canal.

The item is a black and white photograph of the Alberni River. 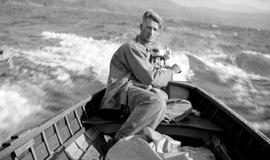 Anderson in boat on the Alberni Canal. 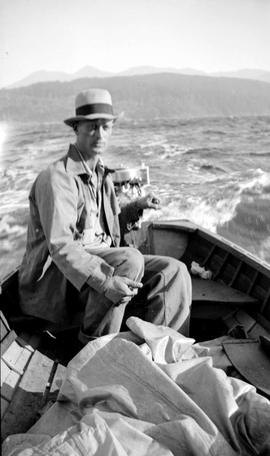 Anderson in boat on the Alberni Canal 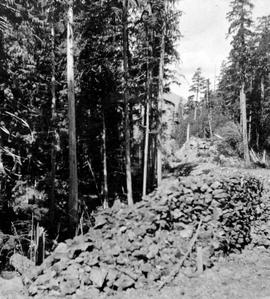 The item is a b&w photograph showing a pile of copper ore for shipping at Murdock Landing, Alberni Canal. 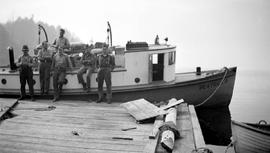 The item is a black and white photograph showing a First Nations fish trap, probably on the Alberni River.

Mud flats in the Alberni canal. 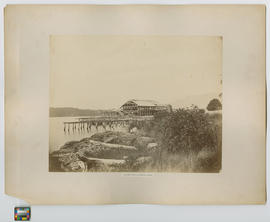 The Nootka Indians of British Columbia

Ethnographic film. "'The western side of Vancouver Island is the homeland of the Nootka Indians and the opening pictures are scenes of the surf-dashed rocky shore and the land with its heavy growth of cedar trees. There are views of the women digging clams, picking berries, gathering cedar bark and weaving it into hats, mats, and raincoats, and basket and fish trap making. Games and masked dancing, the cedar canoe in use, and the silversmith at work are also shown.' The opening scenes were shot around Ucluelet, on the beaches and at the edge of the forest. There is a shot of pilchards being caught in nets, and [close-ups] of various Indians at Ucluelet. Shots on the beach with men using primitive tools. A man, Tyee Bob, makes a fire by twirling cedar sticks at Alberni. Women weaving hats, mats, and preparing the cedar bark to do so, are in Ucluelet, good [close-ups]. A woman weaves a clamming basket out of spruce root, Ucluelet. The final scenes show women and children playing a bone gambling game (probably a women's beaver-teeth gambling game, and not lahal) around a mat in their village at Ucluelet. A man whirling a bullroarer, a painted blanket, a man carving a totem pole, a girl drumming on the door steps, a girl shaking a rattle and singing, and an old woman dancing in front of a house with shredded cedar bark on her head, Ucluelet." (Colin Browne)